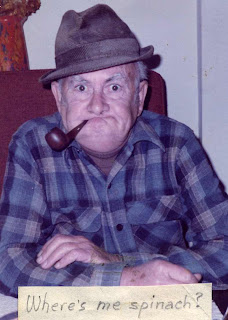 Today would have been my dad's 92nd birthday. He was a pretty unusual guy by most people's standards: writer, editor, musician, carpenter, sometime artist, cook, and most of all, an inveterate writer of humorous letters and postcards. I have a thick file of his correspondence dating back many years, and I think that many others do also. It's hard to throw away something written with such humor and craft.

He was a copy editor, columnist and correspondant for such illustrious publications as The New York Times, The Philadelphia Inquirer, PM, The Papermaker, and The Stars and Stripes. When I got my first typesetting equipment, Dad (old newspaperman that he was) had me set up a letterhead for him entitled "The Tincup Times" whose motto was: "All the Views Unfit to Print". He had it copied and used it as the masthead for many of his letters, which were sent on a regular basis to numerous friends and relatives around the world. My favorites were and still are the ones with the quirky address lines he would make up, like one he sent to me addressed "Calamity Jane, Camp Cactus" from "J.R. Tincup, Tumbleweed Towers", or to "Bedlam Gables", from "The Fractured Arms". He was also known as Mesquite Manny, Tumbleweed Tim, Boardwalk Benny, Diamond Jiminy Crickets, Lord Feeley of Letchworth (don't even ask) and his favorite, I think: Ta Ta.

So, tonight I'll raise a glass (Dad's drink of choice...a Screwdriver. A pretty pleasant way to get your daily dose of Vitamin C, according to old Tincup himself) to Tumbleweed Tim, a man of letters.
Cheers, Dad!
Posted by cactus petunia at 2:11 PM No comments:

be careful what you wish for... 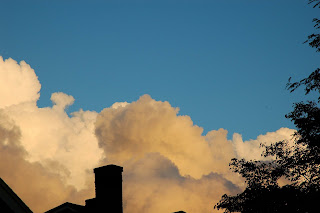 A rainy Oregon Monday morning. The birds are singing, but it's not as joyous as on sunny days. It sounds more like the hangover after a wild weekend...kind of wobbly, and a bit resigned to being wet. Or maybe they're all just too busy stuffing big fat worms into their beaks to make much noise. Last night at sunset the low, grey clouds suddenly moved on, and left these billowy, monumental, Maxfield Parrish-esque thunderheads in the turquoise sky.

I have this snippet of a poem running through my head: "After the rain, good weather. The universe spreads out like a beautiful brocade. Light breezes, high in the trees. All the birds sing at once. What is more natural? After sorrow comes joy."
Posted by cactus petunia at 7:41 AM 1 comment: 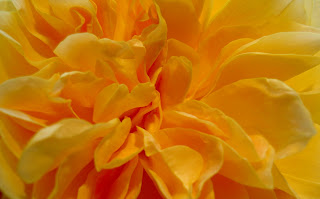 In the winter, the dark, wet days seem to stretch out endlessly and I begin to wonder if I'll ever see the sun again. Dave sits at his light box in the mornings, trying to at least get some artificial daylight to lessen the effects of SAD (seasonal affective disorder-aptly named) and just when I think I can't take another drop of rain on my addled head, spring comes!

Now the days are warm, and I have trouble staying inside the studio and working when the sun is shining. I've been waking up in the morning to what sounds like a million birds having a wild party outside my window. I go out to get the newspaper in the morning, and before I know it, I'm off the porch in my pajamas, weeding the front flower beds... The garden is going crazy! I throw seeds in the ground, and they seem to sprout without any encouragement. Here's a picture of a climbing rose, called "The Impressionist", that grows on a twig trellis outside my studio. It's in full bloom at the moment, beckoning me outside to paint it. (silly me, I thought I'd photograph it and paint it later, but it still drew me out of the studio nonetheless...) Sighhh. Maybe it'll be cloudy tomorrow and I'll get some work done.
Posted by cactus petunia at 2:38 PM No comments:

Ay Caramba! Sometimes I feel like I've accidentally tapped into some vast, uncontrollable creative force, and I'm just here to channel it all...
Posted by cactus petunia at 4:29 PM No comments: