Come on by and check out the Holiday Sale next weekend! 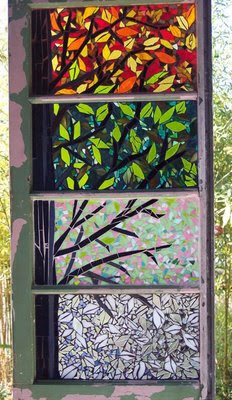 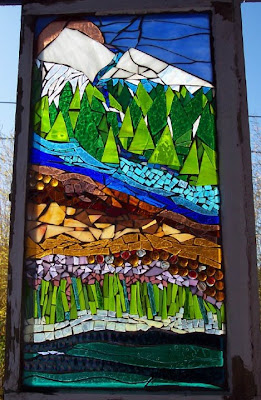 Pauline uses recycled windows and other objects to create beautiful and functional mosaic pieces .
Posted by cactus petunia at 11:41 AM 1 comment:

Yesterday there was a commotion in the studio at Camp Cactus. Here's the rest of the story:
I watched mutely as she dried herself off with the kleenex and draped it carefully over a pincushion to dry. Wings fluttering gently, she perched on a small birch branch on my workbench. "Now that's much better," she chirped, "You're lucky I didn't drown on your doorstep!" She still looked a bit disheveled. A yellow flower-hat on her head was askew, and her chestnut colored hair was dripping on her tunic. She peered at me intently for a second, then shook her head at my apparent inability to speak.

I finally managed to blurt out, "You're a fairy!"

"Well, you sure do have a talent for stating the obvious, don'tcha?" 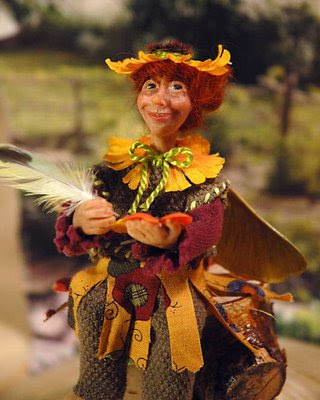 Hopping off the branch, she stuck out her hand and introduced herself. "The name's Marigold. Hope I didn't freak you out too much." She nodded toward Abbie, who was sniffing the air furiously in her direction. "I think the dog's about to hyperventilate. They can't really see me very well, but they can smell me."
"What are you doing here?" I was finally starting to regain my composure and my curiosity.
"I'm on temporary assignment here as the Leaf and Flower Painter. We're not supposed to paint in the rain, but I was getting behind, and then the wind picked up and started blowing me around like a dang seed pod, so I thought I'd duck in here for a bit."
"Well you're doing a wonderful job," I said, "the leaves are gorgeous."
"Shucks. It's my pleasure," she said, blushing from her cheeks to her toes. "Listen, I gotta skeedaddle. The rain's let up, and I've got stuff to do. Nice to meet ya."
"Come by anytime you like," I said.
And with that, she buzzed on out, promising to come back tomorrow and bring some friends.
Stay tuned...
Posted by cactus petunia at 5:47 PM 2 comments:

Yesterday afternoon a fall rainstorm swooped in, the wind sweeping big wet drops against the windows and blowing rain in through the open studio door where Abbie stood motionless, staring out into the yard. 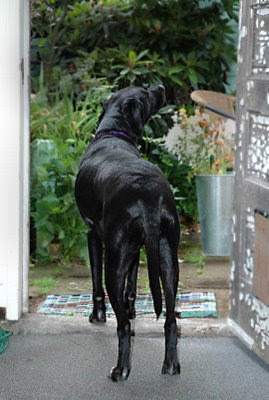 I glanced over at her, wondering what she was looking at so intently. The rain was coming in and the rug was getting soaked. As I got up to close the door, a small fluttery movement just in front of the doorway caught my eye. I thought at first it was a hummingbird...(the red-headed kind called Anna's Hummingbird) it was buzzing just above Abbie's head, and getting blown around by the wind. But something about it was a little off. It was flying erratically, even for a hummingbird. I was pretty unprepared for what came next.

The thing whizzed past Abbie's nose and flew straight in the door, bounced off a wall, and landed in a soggy heap on my workbench. As I walked over to investigate, it picked itself up and shook off, splashing water all over the project I was working on. "Sheesh!" I muttered to myself, thinking now I'd have to try and catch the freaked out little bird before it killed itself trying to get back outside. Its back was turned, and as I reached for it, it spun around and I suddenly realized it wasn't a bird at all, but a pissed off, dripping little red headed fairy. Hands on her hips, she sputtered "Well, if that ain't the bee's knees! The least a human could do is offer a fairy a towel before she tosses her back into the cold!"

My vocal chords didn't seem to be functioning at this point, so I handed her a kleenex.

Stay tuned for more tomorrow...
Posted by cactus petunia at 3:51 PM No comments:

It's that time of year again, when my whole being starts buzzing with creative energy.  I couldn't sleep last night, so I got up and loaded some photos of this guy on my etsy shop. 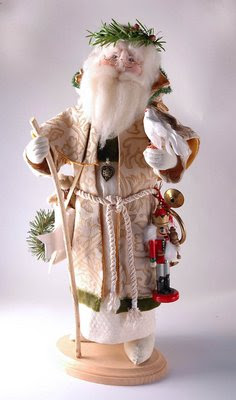 I'll have a few more Santas up as soon as I get them photographed, which means first clearing a space on a flat surface in the studio.  Wish me luck!
Posted by cactus petunia at 5:23 AM No comments: