Holy moley, it's been a busy week...new french doors for the studio,  (I promise to fill you in soon on the remodel) fairies buzzing around everywhere, and somehow I've misplaced my brain. Help!
Anyway, here are some new fairies that were dropped on my doorstep in the past several days. It seems they've been misbehaving a bit, so they're being temporarily incarcerated. They'll be appearing in the Camp Cactus etsy shop until they've finished doing their time.

Here's Pinky, a Garden Fairy captured by a little girl in her grandma's garden...Evidently, Pinky was unmercifully tickling a bumblebee and didn't notice the child sneaking up on her. 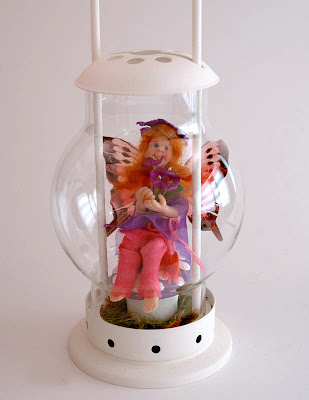 Next up is Doug Fir, a Forest Fairy who was captured in the woods in Oregon. He was getting a little carried away throwing fir cones at hikers. Doug's official job is to defend the stately old trees from invasive species, but sometimes he gets a little confused... And finally, we have Viola. She's a Flower Fairy captured in a perennial bed as she was sternly lecturing the hummingbirds on garden etiquette. An irate gardener thought she was harassing the birds and confined her to this lantern, where she lectures everyone who will listen! 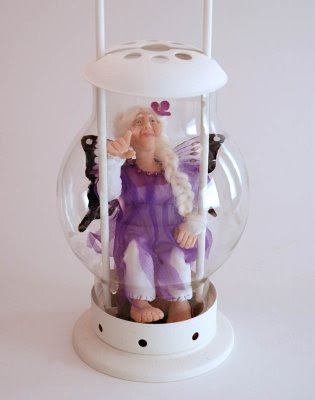 Stop by the etsy shop and adopt one of these fairy delinquents, won't you please?
Posted by cactus petunia at 10:00 PM 2 comments:

Here's a preview of who's going to be fluttering their wings on the fairy red carpet. They've been waiting patiently for their turn in the Camp Cactus photo studio. 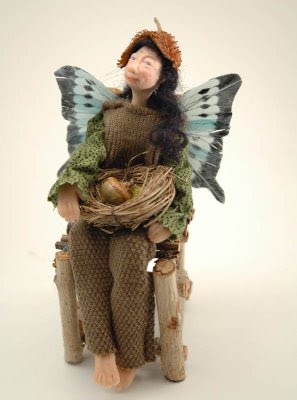 This Is Ginko, a Garden Fairy from Japan. You can meet her and read her bio here in the Camp Cactus Esty shop, where photos will also be available on Friday for her fans. 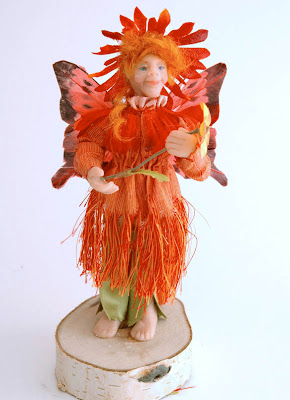 Here's Calendula, a Flower Fairy from Australia. She'll also be appearing in the shop with Ginko and the others. Stop by and say G'day!
Stay tuned tomorrow for some troublesome Fairies who are currently incarcerated...
Posted by cactus petunia at 10:00 AM 1 comment:

More and more fairies are showing up for the Fairy Festival on Mt. Hood...and some of them have gotten quite rowdy! I've had to set up an impromptu photo studio in the dining room today, as they're all in a tizzy about having photos to autograph for their adoring fans. I'll be posting those tomorrow.

Here are some shots of Imelda and Morgana's closets while you're waiting. They'll also be in my etsy shop later today. 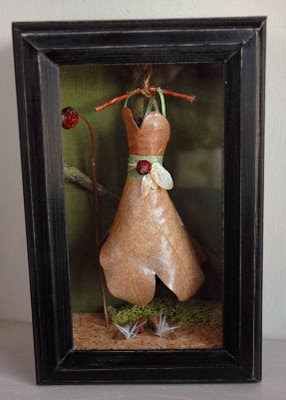 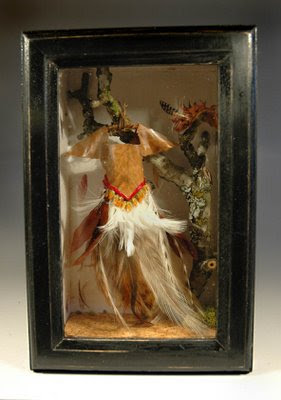 Posted by cactus petunia at 12:28 PM No comments: 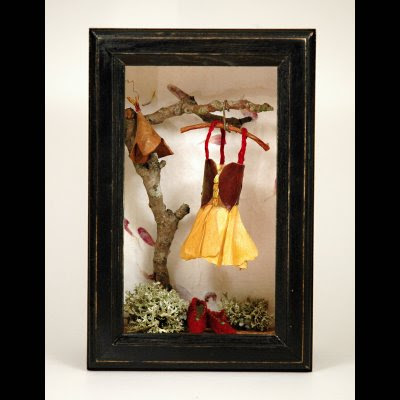 you can check it out in person this weekend at Artists for Children of the World. See you there!
Posted by cactus petunia at 12:11 AM 3 comments:

Here's a gown created for Morgana, a Forest fairy. The skirt is composed of pheasant feathers, with a bodice of American Beech leaves and a waistline encircled with red raffia and
peris japonica blossoms. 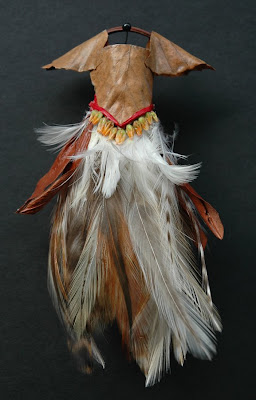 Just in case you think the boy fairies aren't interested in fashion...here's a suit designed specially for Padraic, an Irish Hill fairy who loves to show off his fancy footwork at
those moonlight River Dances. 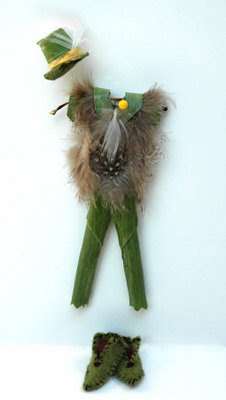 And last, but not least, here are Imelda's favorite shoes: (much larger than actual size) 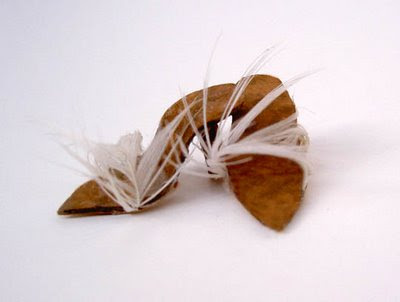 See you at the Fairy Gathering!
Posted by cactus petunia at 9:40 PM 10 comments: